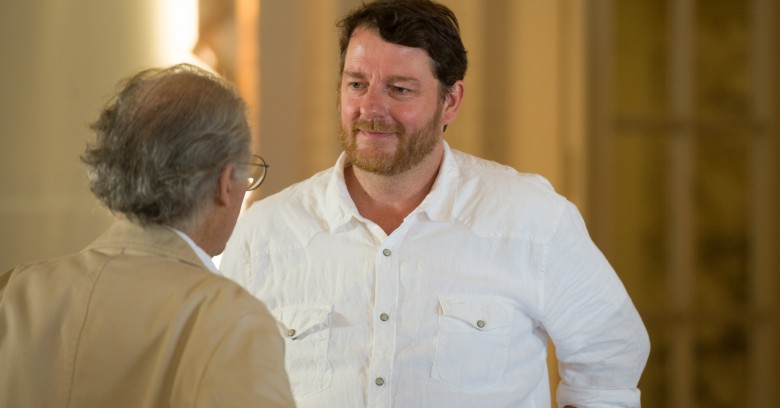 Howard Newman is a Newport-based scholar and artist who represented the Historic Spring Leadership Committee at Catalyzing Newport’s launch of the Mayor’s Office, 2061 on Saturday, June 18, 2016. The committee raised the funds to purchase the site of the gas station for public enjoyment. Howard’s thoughtful remarks are posted below.

Good evening. I am Howard Newman, a member of the Historic Newport Town Spring Leadership Group. We have taken on the challenge to make this place, rich in history, into a place for this generation, and future generations, to comfortably congregate, to learn, and to grow, from our spring’s profound history. We welcome the opportunity given to us by the van Beuren Charitable Foundation, and The Rhode Island Council for the Humanities’ prescient and enthusiastic SueEllen Kroll and Kathleen Shannon through their Catalyzing Newport Initiative, to have Jake Dunagan project us into our future through his ‘Mayor’s Office 2061’ – a future seeded by the digital revolution, weaving a nervous system for the entire human race – a future of disruptive potential in medicine and robotics, in human lifespans and species’ extinctions, and of vast populations surging across the globe in flight from surging oceans, droughts, and totalitarianism magnified by short-sighted greed, and yet, a future filled with the optimism of far sighted generosity – a future of chaos and promise – a future again being tested, as it was in the 20th century, by humanity’s predilection for facile answers through the siren songs of the denier, the scapegoater, and the demagogue. Why here? This spring is not Old Faithful. It’s a hole in the ground, probably first made by the earliest inhabitants of our island from which to drink Life’s water and to survive – long before Europeans were drawn to this same source for the same reasons in their escape from torture and death at the hands of Massachusetts Bay Colony totalitarians, themselves fugitives who had learned nothing from their own persecution by European monarchs claiming sanction through their own religious orthodoxy. Almost 300 years ago, our fugitive immigrant ancestors came to this place to realize the essence of what their adversaries had forgotten- that mutual respect between peoples with different views of the cosmos can live together without hierarchy, without dominion, with judgement founded, above all, on common law. In the next three hundred years, long after we, and the mayor of 2061 are gone, what will those who come here glean from this place? Will they and their children learn about the Catalyzing Newport – dangers of easy answers and the virtues of disciplined growth, or will they have learned to minimize, trivialize, and forget? How right it is to call this place, ‘Catalyst’ – a small something that makes a big reaction, yet itself remaining whole. That is Newport. That is Rhode Island. That is the ideas that brought us here. That is our spring. And that is our challenge – to build, with optimism, a catalytic, public open space, a space formed of civil and religious freedom fed by art, science, literature, history, civic education, and enlightened study of the meanings, benefits, and perils of religion in public life – and at the same time, to build a place we just plain like to come to, to talk over lunch, to share, to nourish new ideas like those that formed our little society all those many years ago. For it is through enlightened understanding and respect for our relationship to one another, through dialog, that we will survive. It is fitting that Jake has built his pop-up installation of more transient, quick-to-decompose materials – just as was this building and the many buildings that were built on this spot before – to emphasize how quickly the present dissolves into the past at the digital speed of light, and how much we, as the temporary stewards of this place, are obliged to focus on those enduring ideals to confront the daunting, yet, I believe, solvable, problems Jake dramatizes here for us. I and the entire Historic Newport Spring Leadership and Advisory Groups thank all of you for your generosity, the enthusiasm of your ideas, and donations as we pursue our goals, and invite you to join with us, learn with us, and grow with us at Jake Dunagan’s ‘Mayor’s Office 2061.’ Thank you.